Perhaps amongst the rarest of all football cards, these brightly coloured little gems would appear to date from somewhere around the 1920s. Vaguely similar in design to those of the Comptons Gravy Salts sets of the mid-1920s, these cards show individual generic footballers in kits of specific clubs. Whether the set covered only English teams or also included the major Scottish clubs we may never know as only three have ever been seen: Bury fan and collector Baz Warburton owns the Shakers one numbered 58; I do not know the number of the Birmingham card which appears in Carl Wilkes’ veritable tome An A to Z of Sporting Collectibles (Pitch Publishing, 2021) and strangely it does not appear in Carl’s ‘Soccer Cards Rarity Scale’ which surprises me somewhat; the Darlington card image comes from the 2016 issue of Garry Daynes’ Football Card Collector Magazine catalogue and again I do not know its number.

I know that Baz paid £50 for his card and the Darlington card has definitely subsequently sold and I’m pretty sure that it was priced at £100.

If you know anything more about this series please get in touch; if you have other cards please be sure to send me scans too if at all possible. 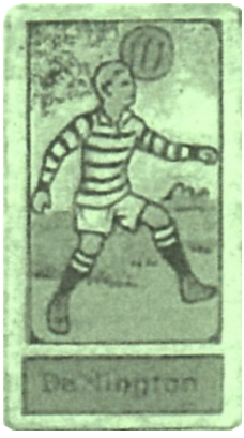 I am short of many images here – can YOU help, please?